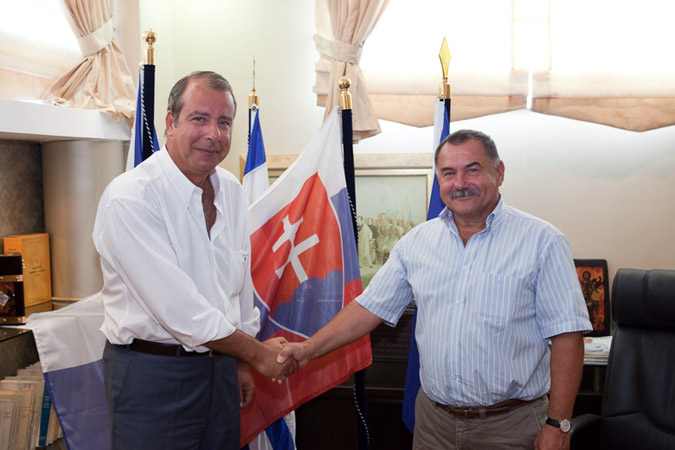 June 12. 2013 NEW CONTRACT BETWEEN EMFASIS AND THE MEDICAL SCHOOL OF COMENIUS UNIVERSITY IN BRATISLAVA A new cooperation contract has been signed by the General Manager Mr. EMFASIS Mr. Menandros Emfietzoglou and the Dean of the Medical School of COMENIUS UNIVERSITY in Bratislava Prof. Mr. Peter Labas. This new contract for official representation of the above University in Greece coincides with the 20th anniversary of Academic presence of Mr. Emfietzoglou in Bratislava, where the overwhelming majority of students of Medicine, Dentistry and Pharmaceutical Faculty have been enrolled into. As it is well-known, the first contract of cooperation with the COMENIUS UNIVERSITY was signed upon the establishment of the English-speaking Department in the academic year 1993-1994 by Mr. Emfietzoglou and the then Rector Prof. Peter Mraz. Twenty years of perfect cooperation followed this event, a direct confirmation of which is the signing of a new contract that took place on March, 18th with three-year validity. In this way, EMFASIS becomes the largest preparatory Greek School for university studies, based on the establishment of official contracts and, simultaneously, investing in building facilities with owned classrooms of modern, high technology and highly skilled personnel, and maintains a leading role in Studying Abroad throughout Europe. A paradox is that some offices lately activated in the field of Studying Abroad try to harm EMFASIS with groundless lies and various slanders, with unrealistic claims and ridiculous actions. The Administration of EMFASIS states clearly that it will not deal with these people who have chosen the slippery slope of a false notion of competition, and will not even take any legal action against them. They are liable to evaluation by thousands of parents and students who for 20 years "embrace" EMFASIS and its people with their confidence, firmly believing that the consistency, honesty, professionalism and conscious implementation of the commitments it undertakes, have no rivals, because the only truth in life is practice itself.